What to Do If You See a Cougar

Jimmy Hubbs
Table of Contents show
Knowing What To Do If You See a Cougar
Stay Calm
Stay Smart
Don’t Be Fooled By Cute Cougar Cubs
Make a Lot of Noise
Get Big
If Confronted, Get Intimidating

If you go hiking, backpacking, camping, or adventuring in the western part of the United States (or Canada) – or anywhere else that cougars live – you’re going to want to make sure that you know what to do if you see a cougar or mountain lion. 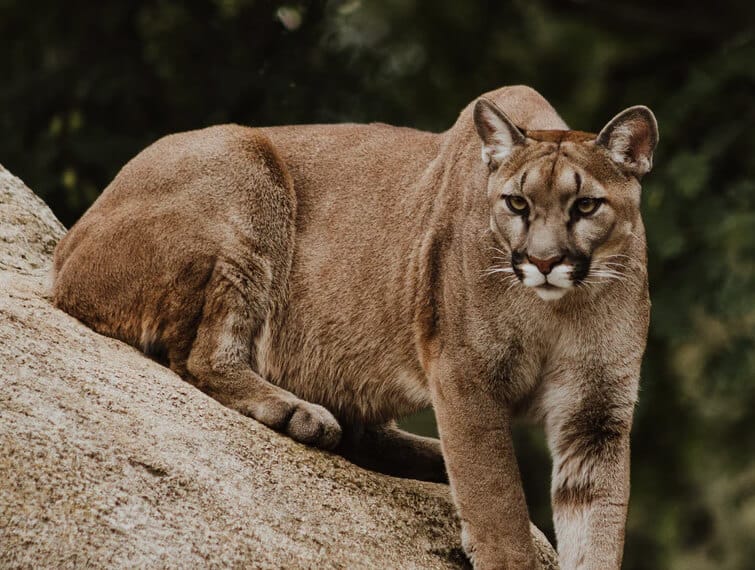 Even though there are only about 30,000 cougars living in the United States (Source) right now – and that they are typically more afraid of people and anything but interested in engaging with you – they are ferocious predators that stalk their prey, and aren’t at all shy about turning into powerful and effective killing machines at the drop of a hat.

Truth be told, the odds are good – VERY good – that you won’t ever have to worry about dealing with a cougar attack. Even though these animals have individual territories that stretch out to 370 miles they just don’t go after people all that frequently.

The bad news is, though, that we still don’t understand the why behind the rare cougar attacks when they do happen.

Knowing What To Do If You See a Cougar

To help you better prepare for these kinds of extreme incidents we’ve put together a quick list of 6 things you want to do should you come across a cougar in the wild.

Right out of the gate, it’s important to understand that if you do have a cougar encounter the chances are that the cougar “wanted” you to see them – and that could be good news or it could be bad news.

At the end of the day, you want to stay as calm as humanly possible. You need to think clearly, you need to act decisively, and you need to make sure that you do everything you can to protect yourself and your loved ones. That’s just not going to happen if you begin to press the panic button.

Cougar prevention begins well before you ever step foot on a trail or in the wilderness, and it’s important that you are carrying pepper spray, noisemakers, and (if you have a license and have been training) perhaps even a firearm.

As we highlighted earlier, cougar encounters are pretty rare things – but when they do happen they always make the news, mostly because they are situations that have ended quite tragically.

You’ll need to be sure that you are prepared to defend yourself and your loved ones with bear spray at the very least.

Just as you don’t ever want to come between a mama bear and her cubs the last place in the world you ever want to find yourself in the Pacific Northwest (or any cougar country, for that matter) is between a mother cougar and her babies.

Make no mistake about it, baby cougars are absolutely adorable. There’s also something really engaging and really beautiful about grown cougars – male or female – but you have to remember and remind yourself in the moment that these animals are apex predators and absolute killing machines.

If you spot a cougar cub it’s important that you get out of the area ASAP, remaining on high alert until you are back to safety as cougars will continue to stalk until they are ready to strike.

Make a Lot of Noise

As a general rule it’s not a good idea to make a lot of noise when you are walking through the wilderness if you hope to come across some friendlier fauna.

But if you are in cougar country it’s ALWAYS a good idea to be noisier than you would have been otherwise, just the same way you would be if you were walking through bear country.

You don’t necessarily have to strap a cowbell to your belt or hoot and holler with every step, but you do want to be very deliberate with making more noise than you might have otherwise when just walking through the woods. The noise will not attract cougars so much as it will push them further and further away from you.

If you are able to spot a cougar in the wild the chances are very good that it is planning to strike pretty quickly, and now is the time to get as big as you possibly can.

Make sure that you are still giving the cougar plenty of opportunity to retreat and to run away – never back them into a corner – but always tried to stand up as tall as you can, raise your arms up as high as you can, and puff out your chest so that they see as much of you as possible.

The idea here is to intimidate them into not attacking you. Studies show that cougars attack individual people more often than not as opposed to groups, but when they do strike groups they always go after the smallest (and perceived to be weakest) folks in the pack.

Get big and you may be able to frighten them away before things get nasty.

If Confronted, Get Intimidating

If getting big doesn’t work as well as you had hoped it may be a good idea to become as intimidating as you are able to.

Lock onto the cougars eyes, never breaking contact – not only so you keep close watch on their behavior but also to intimidate them the way they would be in the animal kingdom – and make as much noise as you can. If possible, pull out any of the defense tools or weapons you have brought with you and get them ready or reach for a nearby stick that you can beat on the ground or wave in front of you to spook them off as well.

In an ideal situation the cougar will be frightened off (though you’ll still want to stay vigilant). In a nightmare scenario they will attack, and that’s when you are going to want to fight back with everything you have – striking them in the eyes and face with all your force. Also check out out article on What To Do When You See A Black Bear.