FacebookTwitterRedditPinterestLinkedIn
Home » What Is a Topographic Map Used For?

What Is a Topographic Map Used For?

Outdoor adventures will never be complete without a topographic map in hand. A topographic map gives a reader more details regarding the terrain compared to other types of maps, and this is the reason behind their ever increasing popularity. Unlike regular maps, topographic maps, or topo for short, can show you different ground features, natural and manmade alike. 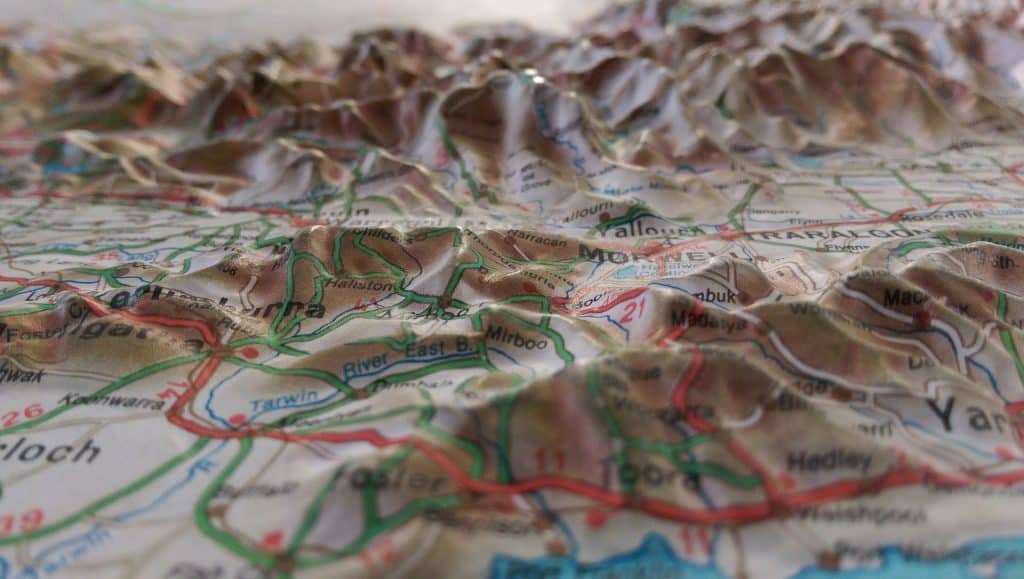 Topographic maps have been used since late 1700, continuously evolving into those very detailed and comprehensive maps that you can see today. The topos were made through topographical surveys. All the information and details gathered were then compiled and transferred to the special maps to provide the necessary features of any relevant terrain.

A topographic map makes use of colors and symbols to represent various types of terrains and elevations, as well as to identify bigger items on the earth’s surface. Contour lines are also a common way for showing differences in elevation and terrain, although color can play a major part as well. For instance, a topographic map can show the US with yellow, green, and red splotches that can represent low, middle, and high altitudes. Aside from that, these maps can be used for showing large water bodies like reservoirs, lakes, streams, and rivers, mountains, local vegetation, ,and large structures.

Every map comes with legends, although there are a lot of features that are only specific to a topographic map which are standard to the industry, and will also read the same on all of them. The pointed and sharp V shapes in contour lines are representation of stream valleys as the result of erosion. In general, the contour lines of O shape are representation of downhill and uphill terrain. When the loops are closer, it means that they are also nearer the hilltop. Contours which are close together are a representation of a slope or steep grade while lines that are spaced much farther apart are indications of a slighter grade.

A topographic map can help people when it comes to planning projects and events which could otherwise require a physical inspection of the area. The professional planners who will construct whole neighborhoods or buildings can also use topos to look for suitable areas for construction. Miners also use these maps for studying specific locations for them to predict the best spot to dig. And of course, bicyclists and hikers can use topographic maps for planning the best, safest, and fastest routes for their activities.

Significance of Topos in the Modern World

Topos play a crucial role in planning different activities. For example, a motorist who wishes to cross the country wouldn’t want to just plan the route to take by merely looking at available roads and selecting the shortest travel time. With the help of a topographic map, he will be aware of rocky areas, mountain ranges, landmarks, river crossings, and a plethora of other things to help him make more educated travel decisions.

Topographic Map – How to Use It?

For outdoor enthusiasts, being knowledgeable on how to use and read topographic map is an invaluable skill. Whether you are planning to hike or searching for a place for camping setup in an area that’s unfamiliar, knowing how to use this kind of map will surely make you a better informed and more confident explorer. What is so neat about this topographic map is that it enables you to visualize a particular area in a 3D way in comparison to the 2D that some maps can offer. Here are some of the tips that will help you form a mental picture that topographic maps enable you to create:

Putting It Into the Context

Along with some contour lines, the topographic maps include a scale in which to base the distances. When the map is made, the entire area is shrunk down to give users a minimized picture of the big swath of land. Usually, they’re shrunk so that a small measurement on the map is equals to a bigger unit of measurement on the map. So, for example, a topographic map could have a key, which reads 1:24000 inches. It means that every inch displayed on the map is 2000 ft or 24000 inches on the land itself. It’s a scaling method that provides an accurate land transportation that you are currently on.

As mentioned, topographic maps utilize the system of lines, which indicate elevation. When compared to the regular maps that only enable you to think in terms of width and length, these basically add height to the mix. This works through using of contour lines. Essentially, they’re lines that are drawn and represent an equal elevation’s area. Therefore, as you look at the circular hill on the topographic map, for example, you’ll see contour lines at various elevations all way up to the peak of the hill. To make it much easier to read, majority of the topographic maps are using the contour interval, which is specified in the legend or key. It enables you to judge the elevation increase’s relative steepness. Generally, the lesser space between the contour lines, the steeper the valley or hill is.

Check out Youtube Video by: REI on How to Read a Topo Map

How to Make Most of the Topographic Map

Regardless of how well you could read a topographic map, it will not do any good in real-life outdoor experience once you ignore the information provided. For instance, if you are searching for an easy, nice hike at an ambling pace, you would want to seek for the map’s areas where the contour lines are apart and the elevations are steady. Meanwhile, a hike for exercise could benefit from rapid changes in the elevation. The topographic map’s ingenuousness does not necessarily lie in pure information it offers and it is on how you use the information.
Now that you already know the basics of what makes such topographic maps unique, never hesitate to use one whenever you go for an outdoor adventure.