Best ways to Remove a Splinter

Read More
May 11, 2020
366
0
Outdoor Federation is supported by its readers. When you purchase through links on our site, we may earn an affiliate commission. Also, as an Amazon affiliate, we earn from qualifying purchases.
Table of Contents show
First Aid Steps to Remove a Splinter
Do not squeeze the splinter
Examine the area
Clean and dry the area
Ways to Remove a Splinter Properly
Salve
Baking Soda
Tweezers
Needle
Nail clipper or razor blade
Potato
Packaging tape
How To Get A Splinter Out With Hot Water
Will A Splinter Come Out On Its Own?
How To Get A Splinter Out With Baking Soda

Splinters are tiny pieces of wood, glass, or metal that lodge under the skin, usually in the finger. Most people know that even the smallest splinter can cause much pain and discomfort. Furthermore, if it is not removed, it can cause an infection to develop, which may increase pain. However, sometimes, removing a splinter improperly can also lead to complications that lead to infection.

Handling an object may cause a small portion to dislodge as the person applies friction to that object (examples would be woodworking, metalworking, or falling and sliding on wooden floors). The protective thorns of plants may cause splinters to lodge in the skin while gardening.

Going into the woods to spend time and admire nature is fun but coming back home with splinter in the skin is not so encouraging. Removing a stubborn splinter from your finger or foot is never painless, especially if it involves digging into your skin with a needle or tweezers. But you can actually remove splinters from your skin very easily and quite painlessly using common household or food items around the house.

There are many ways to remove a splinter, but first you must learn the first aid steps involved:

Do not squeeze the splinter

Clean and dry the area

You want to make sure to avoid an infection when dealing with a splinter. Before you attempt to remove the splinter, clean the skin around the where the splinter is stuck. Wash your skin with soap and water and then gently pat the area dry with a paper towel.

Ways to Remove a Splinter Properly 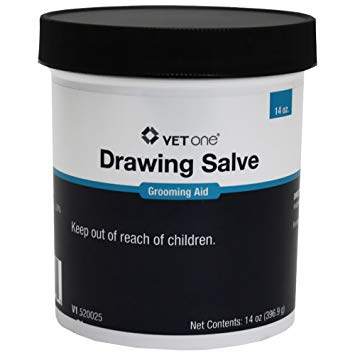 This is a painless way to remove a splinter, but it will take a day to accomplish it. Purchase an over-the-counter ointment called Ichthammol (black drawing salve) from a pharmacy. It is a greasy material with an unpleasant odor. Place a small amount of the ointment on your splinter and cover it with a band-aid. Remove the band-aid after several hours and pick off the splinter. 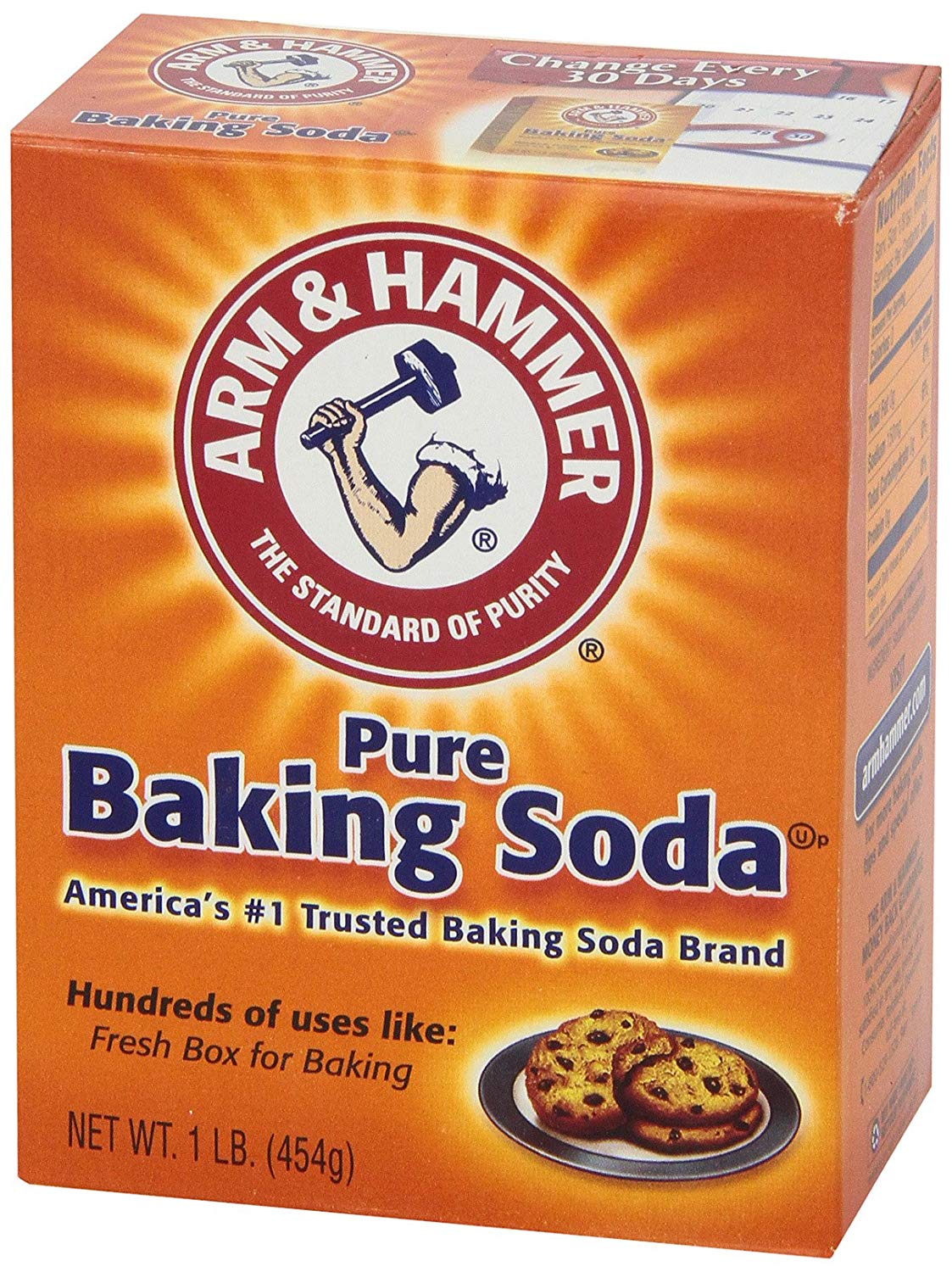 Use topical anesthetic or baby Orajel for extremely painful splinters before trying to remove them. Make a paste out of baking soda and water apply the thick paste to the splinter and you can also spread some of this paste on a bandage, and then place it over the affected area. Remove bandage after about 24 hours. You may see the splinter sticking out of your skin. Pick off the splinter with tweezers. Rinse skin gently. If splinter is not visible, repeat the process with new baking soda paste and a new bandage until splinter is gone. 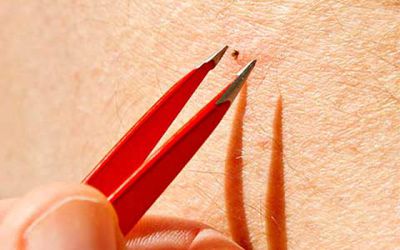 This familiar method works best when the splinter is protruding out of the skin. Sterilize the tweezers tip using rubbing alcohol. Use a magnifying glass to view the splinter under good lighting. Grab the protruding splinter with tweezers.

This method is used for splinter that is embedded under thick, non-sensitive skin (ex. heel of the foot or finger pads). Sterilize sharp edge of nail clipper/blade using rubbing alcohol. Clip off excess skin over the splinter with nail clippers. You can also use a razor blade as in needle to cut skin parallel to the splinter. Pull skin gently to see the splinter. Use tweezers to pull the splinter out. If the splinter is not sticking out, use a needle to nudge it out before pulling it out with the tweezers. 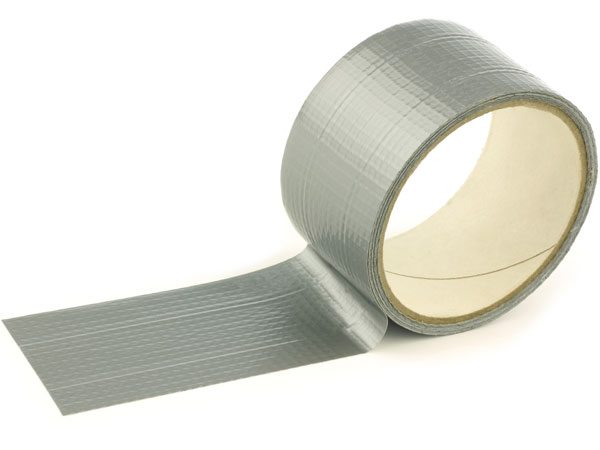 Cut a piece of packaging tape that is long enough to cover area of splinters. Apply tape over the splinter area, making sure not to put on too much pressure, but just enough to make the tape stick. Peel off the tape gently to lift the splinters away. Repeat as necessary.

It is a good idea to apply antibiotic ointment after removing the splinter. This will help prevent an infection. You can get an antibacterial ointment at any drug store. Apply the ointment as directed. For example, use a cream from a drug store like neosporin to cover the wound. If you’re on existing medication, check with a pharmacist before selecting your ointment. You want to make sure the ointment you choose with not interfere with your current medication.

Watch this video by SciShow on what happens if you don’t take out a splinter?

Sometimes, your skin will bleed after you remove a splinter. Press firmly around the area where the splinter was. This will bring the skin together to patch up the wound and stop bleeding. You may also need to apply a band aid. If a splinter will not come out and is causing heavy bleeding, you may need medical attention. You also may need medical attention for a splinter that’s underneath a fingernail or toenail. If you are not up to date on your vaccinations, you should see a doctor if you get a splinter to make sure you don’t need something like a tetanus shot to prevent infection.

How To Get A Splinter Out With Hot Water

The last thing you want to do if you are dealing with a nasty splinter is dig around blindly, hoping that one of the chunks of skin you tear out is going to include the splinter itself.

Instead, to get rid of this annoying and often times painful little sliver you’re going to want to try out this quick tip – using hot water to sort of “float it” right out of your body.

To start things off, you’re going to want to soak the area around your splinter with hot water (water just as warm as you can stand). Try and let your skin soak up the water for a couple of minutes – maybe five minutes max – and then the skin should be soft enough to get to work.

Use a pair of tweezers to lock right onto the splinter and then pull it out of the skin. It should come really easily because the skin is so soft right now. Apply a little bit of rubbing alcohol to sterilize the area and maybe a Band-Aid and you’ll be good to go!

Will A Splinter Come Out On Its Own?

If you are dealing with a nasty little splinter in your hands or feet – especially a splinter that slipped completely beneath the skin, making it really difficult to get out without cutting yourself open and extracting it (a pretty painful proposition) – you might be tempted to sort of waited out and see if it’ll force its way out of the skin on its own.

While that will certainly sometimes happen (maybe even more often than not), most medical experts don’t recommend you leave a splinter in any longer than absolutely necessary.

You see, your skin is immediately going to try and attack the foreign object inside of your body. This is what the first line of defense against disease and infection (your skin) does – and there might be a lot of bacteria on that splinter, too.

You might wait a day or two just to see if the splinter will work itself out of your skin on its own or work its way into a position where you can help it along, but you don’t want to wait any longer than that.

If you’re having a really tough time getting it out a trip to the doctor might be in order!

How To Get A Splinter Out With Baking Soda

There isn’t a person on the planet that wants to deal with a nasty splinter any longer than absolutely necessary – but sometimes even just the thought of having to pull, cut, or tear a splinter out of your skin is even more painful than going through with the process!

Lucky for you, though, you may be able to (almost) painlessly remove your splinter with just a bit of baking soda.

What you’ll want to do is mix up a single tablespoon of baking soda with another tablespoon of warm water, mixing it until it has a toothpaste like composition.

From there, apply the baking soda paste to the area where your splinter is and cover it up with a bandage. Leave everything sit for 24 hours (and maybe a little longer) before pulling the bandage off.

By this time the baking soda should have worked the splinter up out of your skin (at least partially), allowing you to gently – and almost painlessly – remove it right away.

Previous articleHow To Fix A Zipper That Splits
Next articleBouldering Vs Rock Climbing: Any Differences

Can Cycling Cause Shin Splints?

Winter is fast approaching, which means it's time to get out your old winter boots... and then promptly remember that...
Read

How to Shrink Neoprene Gloves?

For the diving enthusiast, surfing fan, or avid biker, what completes the stylish and safe look of the athlete or...
Read more

Canyoneering is always a fun activity if you love the outdoors, want to get some steady exercise, and explore new places all at the...

We spend so much of our lives on our feet that we really should take better care of them. How often have you found...

At last count, more than 77 million Americans spent at least a little bit of time camping last year – and this number continues...

Outdoor Federation is a participant in the Amazon Services LLC Associates Program, an affiliate advertising program designed to provide a means for sites to earn advertising fees by advertising and linking to Amazon.com