The Casio watch company hit a homerun the moment they released the very first G Shock watch decades ago, but they weren’t satisfied to sit on their laurels with an award-winning design and just kind of call it a day. 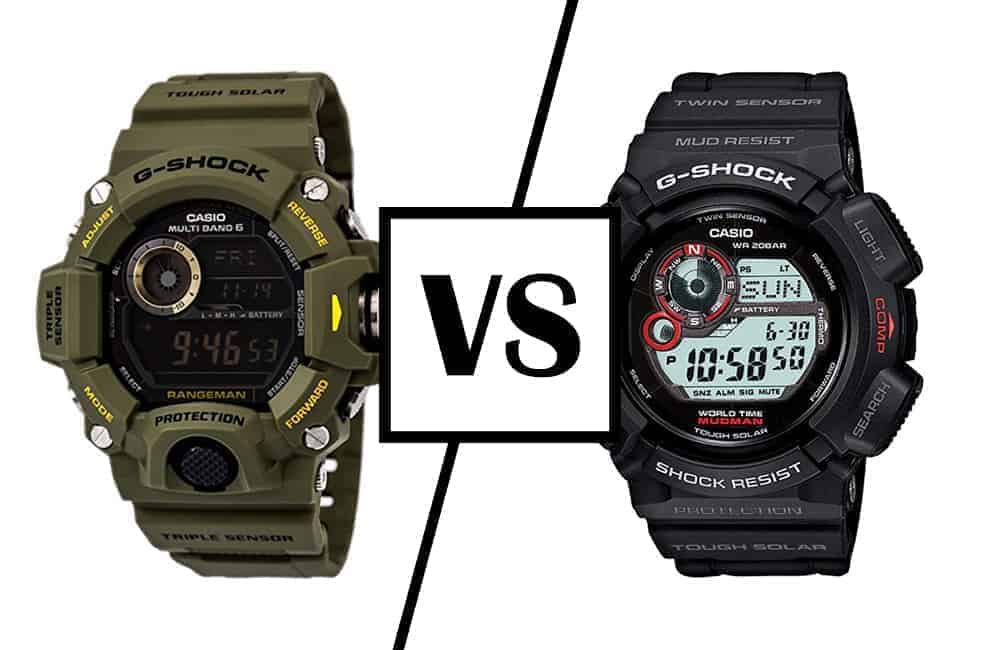 Both of these watches are rock solid, feature rich, and have skyhigh levels of durability and both of them are going to leave you impressed with what they can handle without ever looking even a bit worse for wear.

To figure out which one is best suited to your specific needs, however, we’ve put together this quick guide. Let’s dig a little deeper into whether you should add the G Shock Rangeman or the G Shock Mud Man to your wristwatch collection.

As highlighted above, both of these G Shock watches are designed to be able to withstand everything you can throw at them and then some – as well as everything Mother Nature can cook up, too.

Both of these watches feature the patented shock resistance, drop resistance, and waterproofing capabilities you’d expect from a G Shock option but they are also highly resistant to serious temperature swings, too. Both the G Shock Rangeman and the G Shock Mudman are rated to withstand temperatures as low as 10°F.

They can be submerged in up to 200 m of water before their waterproofing starts to fail as well, allowing you to do pretty much everything short of deep-sea diving with one of these watches strapped to your wrist.

At first blush there really isn’t all that much different looking when stacking the G Shock Rangeman and the G Shock Mudman next to one another. They both share the same mineral glass protective display, the same rubberized frame, and (for the most part) the same button layout as one another.

The date layout on these watches is a little bit different as well but other than that they are pretty close as far as cosmetics are concerned. They look great, they feel great, and they are going to be able to perform in pretty much every weather condition imaginable.

Where things really start to separate themselves between the Rangeman and the Mudman is in the actual case design of these wristwatches.

Interestingly enough, however, the Rangeman has buttons that are covered in stainless steel construction material. The Mudman opts instead for resin buttons that you’ll find on a lot of the other G Shock watches throughout the product lineup.

These construction material choices aren’t purely cosmetic, either. The material selected make the Rangeman way a little bit more than the Mudman . The Rangeman is going to come in at just over 39 g while the Mudman itself is only going to add 68.5 g to your wrist.

Now that we have covered the main differences between both the G Shock Rangeman and the G Shock Mudman it’s important that we highlight the similarities that they share across the board.

For starters, these watches take advantage of atomic timekeeping support. This means you’re going to be able to pick up data directly from atomic timekeeping signals sent out periodically throughout the day to guarantee that your watch is always as accurate as humanly possible.

On top of that, you won’t have to worry about making any daylight savings time changes, either. The watch will handle all of that for you.

Full stopwatch and countdown timer capabilities are built into both of these G Shock watches. You also get the opportunity to set five individual daily alarms (and a single snooze alarm) with these watches while taking advantage of our time chime signals, power saving features, and a full 100% automatic calendar.

The ability to run both of these G Shock watches in 12 hour or 24 hour formats is another big bonus, and flipping back and forth between these two different formats is as simple as pressing a single button.

You can also configure whether or not you want buttons to chime when they have been operated or not, will enjoy and accuracy level of plus or +/- 15 seconds per month (with atomic time correction throughout the day), and at least eight months of full battery life on a rechargeable battery built right in.

All things considered, both of these watches are high-quality additions to serious adventurers and outdoors people that want to keep highly accurate time in any and every type of weather condition imaginable.

It’s tough to imagine there being any more rugged, durable, or reliable watches on the market right now than the G Shock Rangeman and the G Shock Mudman . You won’t go wrong with either one!