According to the American Alpine Club Statistic Tables for North America, the last 55 years have seen about 30 deaths year of climbers (on average) – and many of those deaths can be directly attributed to an inability or an unawareness of how to tie rock climbing knots correctly and when to use one knot versus another. 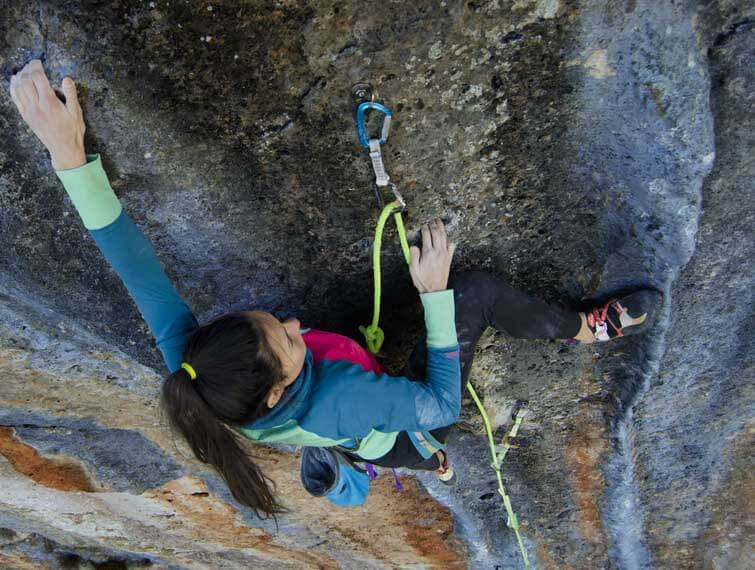 Below we highlight some of the most important rock climbing knots that you’re going to want to master ASAP, the kinds of knots that can help you better secure yourself as well as others when you decide to go out climbing.

As always, be as safe as humanly possible and invest in high-quality ropes (static as well as dynamic) and climbing harnesses – and other safety gear – protect yourself as best you can.

Let’s get right into some of the most important climbing knots you need to know how to tie before you get started.

Far and away the most common type of knot you are going to want to tie when you are connecting your rope to your harness, this is a relatively simple and straightforward knot that you should be able to master pretty quickly.

Sometimes called a rewoven figure eight or a figure eight follow-through this is exactly the kind of knot you’ll want to practice while wearing climbing harness well before you ever start to scale anything outdoors.

The overwhelming majority of climbers today are going to be using carabiners in a variety of different applications and that’s why you will want to master this knot ASAP.

Specifically designed to help you better secure a rope in place when it has been affixed to a carabiner (preventing it from sliding and slopping around), this knot is relatively easy to untie even after it has been put underneath a heavy load which makes it super attractive for climbers that want to work in a hurry without sacrificing their safety.

A lot of climbers use this to connect directly to different anchor points. It’s not a bad idea to learn how to tie this knot with both your hands, either.

Another super simple hitch knot that you are going to want to master as quickly as you can, the girth hitch is almost exclusively used to connect loops and ropes to fixed points – anchors, trees, or specific anchor tie-in points on your climbing harness.

This is a very strong, very solid, and very reliable hitch that can be untied pretty quickly even after it has been put under a strong load.

This particular hitch is sometimes called the Italian hitch or a crossing hitch. A simple adjustable knot that’s used by climbers as well as rescuers, the overwhelming majority of people using this knot are looking for a way to control friction when they are life lining or running a belay.

Because of the popularity, the durability, and the safety of this knot there are even a lot specialty locking carabiners out there with a pair shape specifically designed to take advantage of this knot.

Popularized by a Swiss mountain guide really helped to pioneer its use (a man by the name of Werner Munter), the reversibility of this knot is what makes it such a game changer.

Capable of easily being used on a mainline when climbing while just as easily being used as a work positioning strop, climbers all over the world of to tie this hitch knot because of its high responsiveness, it’s friction capabilities, and it’s unique ability not to jam up or slip when you have addressed it correctly.

Another big advantage of this particular hitch is that it is only ever going to grip in a single direction. That lets you move it about without having to worry about it coming up your progress, though you can reverse the position back into the working position and it’ll hold with a rock solid lockup.

Every climber that starts to take on more and more adventurous – and difficult – faces to climb will inevitably find themselves having to combine two sections of rope with one another, and that’s where this super popular knot comes into play.

Almost impossible to untie after it has had a load put on it, the reliability and the consistency of the double fisherman’s knot is what makes this such a popular choice for climbers. Fisherman (obviously) also get a lot of use and utility out of this particular knot for the same reason – it gets stronger the more that you (or a fish) pull on it.

Sometimes referred to as a European Death Knot (and often abbreviated as the EDK), this is another great tool for those that want to be able to join rappelling ropes together with one another.

Unique in that it completely flattens out after it has been loaded down in a way that very few other knots ever will, you aren’t going to have to worry about this knot getting stuck or jammed up when you are pulling your climbing ropes down.

The only thing you want to make sure of is that you don’t accidentally find yourself tying a flat figure eight knot (they share a lot of similarities) as that particular approach is not going to help you connect ropes for rappelling purposes.

Water knots sometimes referred to take knots, ring bends, overhand follow-through knots, or grass knots, and in the world of climbing they are almost always used to combine different pieces of webbing with one another.

Pretty easy to create, all you want to do is form and overhand knot on one in and then follow it through with the other piece of webbing – as long as you are feeding it in the opposite direction. You set the knot by tightening it together and you are off to the races!

Alpine butterfly knot are some of the most commonly used knot in the rockclimbing world, most often tied in the bight so that you don’t have to worry about accessing one end of the rope or the other to create it.

When it comes to really versatile rock climbing knots this particular choice really shines, given that it has fantastic capabilities for handling multidirectional loads without much difficulty. It’s symmetrical shape makes it really easy to inspect even with just a quick glance, it can be used as a midline rigging knot, and you can choose to take advantage of it with traverse lines, anchor points, to shorten slings, and even to isolate damaged sections of rope you want to avoid.

One of the most resistant to jamming rock climbing knots you are ever going to be able to create, a zeppelin Bend is basically made up of two symmetrically intertwined overhand knots that are tied end to end with one another.

Not only will you not have to worry about this knot jamming up on you but you also aren’t going to have to worry about cyclic loading or slack shaking issues with this style of knot, either. Created in the 1960s (1966, in fact) it was used widely throughout the U.S. Navy before it made its way over into the rock climbing community.

So there you have it, just a handful of the most important rock climbing knots you are going to want to learn how to tie ASAP.

New climbers are always encouraged to get their hands on a couple of lengths of rope and just sort of tie different knots together whenever they have a bit of free time.

This gives you the practice you need to become proficient and confident in your knot tying ability, but it also gives you an opportunity to learn how to tie these knots well even when you aren’t necessarily laser focused on tying exclusively – like you might find yourself when you are scaling the face of a rock.

There are other knots that you’ll want to learn and master as well as you develop as a rock climber, but the handful of options we highlighted above will serve you well in most instances and definitely lay down a rock solid foundation of knot mastery that you’ll be able to rely on for years and years to come

Best of all, these knots transfer overwhelmed to other areas of your life as well. With a bit of practice you won’t have to rely on shoelace knots alone to secure things ever again!